The 2014 Ontario Sheet Metal Apprentice Competition was held at Deerhurst Resort from Wednesday, September 24 to Saturday, September 27. The event is open to unionized apprentices in their final term of apprenticeship. The contest consists of three parts:

This year, the apprentices were tasked with creating a replica of the Huntsville Clock Tower. The event featured competitors from across the province recreating a scale replica of the iconic downtown clock at the time of its installation – the model included a crane lowering the clock tower’s cap into place.

The clock faces, cranes, and rock bases were all cut using a MultiCam V-Series CNC Waterjet. The Ontario Sheet Metal Workers Training Centre installed the V-Series Waterjet at their Oakville training facility. The V-Series Waterjet is a smart CNC investment for those wanting to enter the waterjet cutting arena.

Congratulations to the top 5 competitors who are now on to the national competition in Edmonton AB next year! 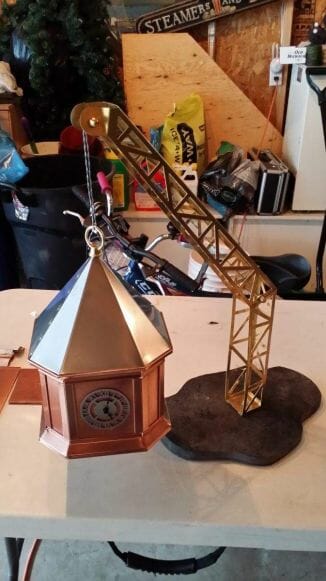