4 Factors Affecting Quality of Waterjet at the Cutting Head 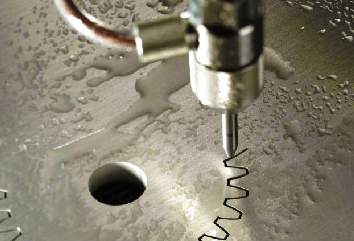 There are multiple factors that determine the precision of the overall waterjet stream. For quality at the cutting head only, these features should be considered for successful abrasive waterjet cutting:

In order to avoid unnecessary damage of consumables by the waterjet stream, precisely machine and fit the orifice, mixing chamber, and abrasive nozzle perfectly together.

The inside of the abrasive nozzle should be machined to perfectly align with the waterjet stream.

To produce an efficient, high quality stream by the orifice, small diameter waterjet streams are used. The trade-off is that the cutting speeds are slower than when using a larger orifice due to the smaller amount of water and abrasive used.

It is critical to maintain a close distance between the nozzle and the work piece (0.04”-0.06”) in order to produce accurate parts and receive maximum efficiency from the waterjet. When cutting closer to the material, it limits the amount of atmosphere that the waterjet has to travel through prior to reaching the work piece. It also limits the expansion of the waterjet stream. As the jet expands, the effective power of the jet is condensed. To compensate for this, cutting speeds will have to be reduced. If increasing the distance between the nozzle and the work piece is decided, cutting speeds should be reduced accordingly to attain similar results with respect to tolerance and edge quality. For example, if the work piece is increased by 0.25”, the cutting speeds will be reduced by about 20%. For ultimate control of the waterjet stream, cutting underwater with CNC height control should be considered.

Click Here to learn more about all our available Waterjet options.