Canadian Manufacturing Sector Recovers in May

Positive Outlook for the Manufacturing Sector after Hitting Hard Times

The RBC Canadian Manufacturing Purchasing Mangers’ Index (RBC PMI) is intended to give a snapshot of the health of the manufacturing sector. An RBC PMI of above 50.0 signals expansion and a mark below 50.0 means the sector is contracting. Last month, the RBC PMI rose to an 11-month high to 53.2. This was a 6% increase from the figure of 50.1 recorded in April, signalling that the sector is officially expanding again following the all-time index low of 49.3 recorded in March.

The RBC PMI found that production had increased for the first time in three months. This rise in production levels was backed mainly by a much higher rate of new orders growth. This rise in new orders was also the catalyst for the first increase in backlogged work in eight months encouraging firms to hire more workers. This was the strongest rate of job creation since August of 2012 with 22% of firms in th 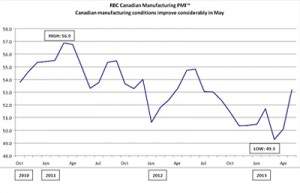 The costs of inputs rose only moderately and the quantity of inputs bought by manufacturers rose for the second straight month. Yet, stocks of purchases depleted further in the month as more companies look to thin their inventories and practice just-in-time delivery. By not holding onto such large inventories, companies can improve their cash flow and operate more efficiently. On the opposite side of the spectrum, both the levels of work-in-hand and stock of finished goods increased.

The bottom line is that May was a huge month for the manufacturing industry in Canada following several months of contraction and stagnation. The statistics look encouraging, but whether or not this rapid pace of expansion is sustainable remains unclear. Craig Wight, the senior vice-president and chief economist at RBC expects these sector trends to continue in the remaining months of 2013, boosting Canadian growth. The news is all positive as the industry continues to recover from the rough second half of 2012.