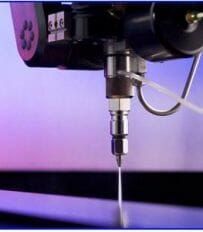 Abrasive is an extremely important component to the overall Waterjet cutting process. A pure waterjet, which is one without abrasives, is most effective on soft materials such as rubber and foam. By adding abrasive to the process, you greatly enhance the cutting capability of the waterjet and expand its capability to cut a variety of materials including steel and glass. As you might expect, the type of abrasive is an important factor. The prominent choice for most waterjet cutting is garnet abrasive as it is fairly rigid and forms sharp edges when fractured. Both of these qualities are especially advantageous in the waterjet machining process. In addition, garnet is relatively chemically inert and will not react with the materials being cut, making disposal a much easier process as well. It is because of these substantial advantages that MultiCam recommends 80 grit garnet abrasive for its CNC WaterJets.

MultiCam recommends this abrasive based on some of the qualities that it possesses:

This means that the abrasive has its fine particles and larger particles removed leaving a consistent grit size. Fine and large particles are major contributors to nozzle plugging, inefficient cutting, and a variety of other problems. By removing fine and large sized particles you reduce the chances of incurring these problems and increase your cutting quality and capabilities.

Sharp abrasive particles cut substantially better than its smooth counterparts. The garnet used for WaterJet machining is either alluvial or mined. Alluvial garnet comes from river beds, smoothed by the constant running water, which is a downfall in regards to its use in waterjet cutting. Conversely, mined garnet is crushed to separate it from other minerals as well as to create sharper edges, which is a great benefit for waterjet machining.

accounts for roughly 70% of the machine’s operating costs. Any percentage this high requires much attention and consideration in order to prolong the health of your WaterJet. The amount of abrasive used per minute varies and is dependent on the pump and nozzle size being used. Typically, MultiCam WaterJets use 0.70 lbs per minute at an operating cost of $0.26/lbs, which is slightly more efficient than the average of 1 lb per minute. MultiCam offers clients an exceptionally made CNC WaterJet, combined with a smart choice in 80-grit garnet abrasive, makes our machines a powerful and versatile cutting solution.