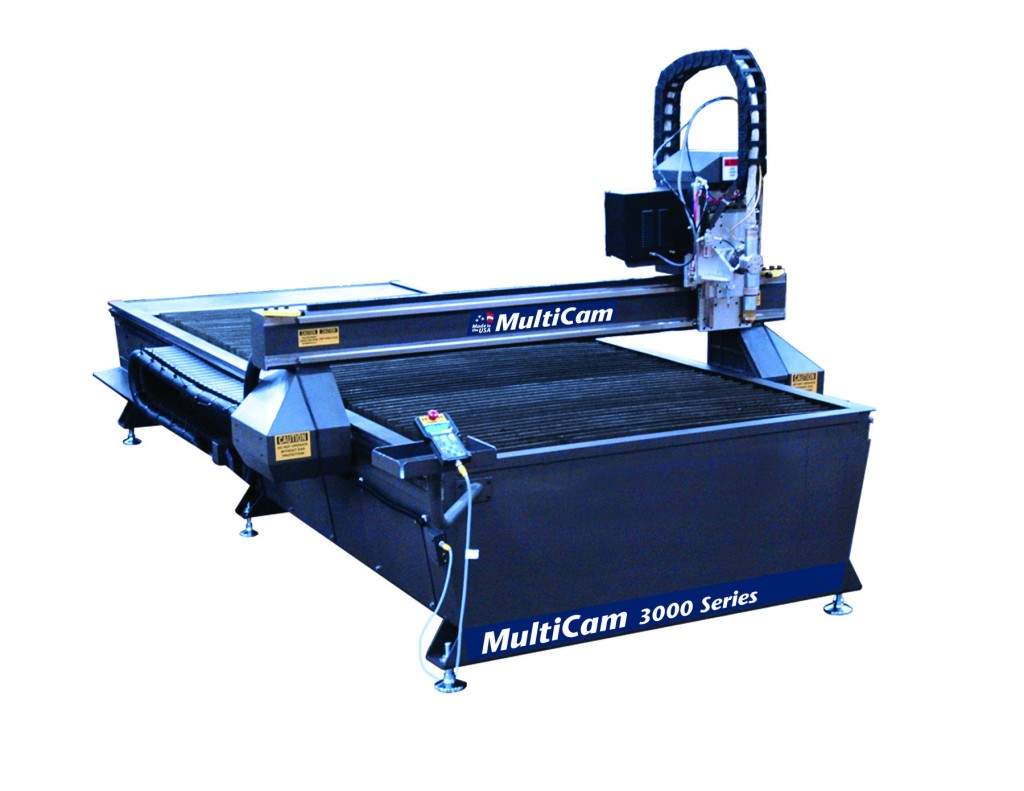 Here is a great article from the team at Hypertherm Inc. that we wanted to share with you!

Although stainless steel usage comprises a relatively small percentage of worldwide steel consumption, it is still vitally important to certain manufacturing sectors, such as the energy and food processing markets. The International Stainless Steel Forum reports usage increasing around the globe, and as usage increases, so too does the need to cut stainless steel.

Recent technology advancements are dramatically improving the cut quality achieved with plasma on stainless steel. These advances span a range of thicknesses, from thin gauges up to 6.25 inches.

Early plasma systems used very high amperages and delivered slow cut speeds. One of these older systems used nitrogen as the plasma gas and water injection for the shield to cut 3-in.-thick material at 15 inches per minute (IPM) with 750 amps of power. If a fabricator wanted to cut stainless steel that was 5 in. think, he would have to use an H35 (35 percent hydrogen, 65 percent argon) plasma gas with a water skirt of coaxial flow at a staggering 1,000 amps. Cut speed was relatively slow at 6 IPM. Also, lower-amperage cutting was not supported, so additional machines were required for cutting fine features in thinner material.

Fortunately, the capabilities of today’s machines are vastly improved. An expanded range of gas choices and amperages provide plasma system operators with a wide array of options for cutting various thicknesses. This way fabricators can choose the best amperage for a given thickness and strike the ideal balance between productivity and cut quality.

Though cutting stainless steel is much easier today, some challenges remain, especially for fabricators used to cutting mild and carbon steel.

An oxygen plasma gas with an air shield can deliver excellent cut quality across the full range of thicknesses in mild and carbon steel. However stainless steel cutting success requires different gases and consumables for different thickness ranges and grades.

Proper gas selection (see Figure 1) is the first step toward success when using plasma to cut stainless steel. Air used as both the cutting and shielding gas is a common choice for fast cut speeds and low cost, but the heavily oxidized black surface finish (see Figure 2) often requires labor-intensive secondary operations to remove it. Depending on the requirements of the finished piece, several other options are available:

The next consideration for successful stainless steel cutting with plasma is material type. 304L, an austenitic stainless steel, is the most commonly used grade worldwide. When a plasma process engineered for cutting 304L is applied to another, similar austenitic alloy, for example 316L, dross and a rough cut edge can result.

Figure 3 shows how the 304L cut is clean with no visible dross. The 316L cut quality was improved to match 304L’s by slightly increasing the cut speed and the shield pressure. Each material type responds differently to plasma cutting. The many stainless steel options require many different cutting processes for best results.

Proper equipment design, gas type, gas setting, cut speed, and cut height all can help to reduce or even eliminate stainless dross formation. One method of preventing dross is to swirl the shield gas in the opposite direction of the plasma gas. This causes the dross to adhere to the skeleton of the plate instead of the cut piece.

Piercing stainless steel is challenging because of the molten material properties (see Figure 4). Slag piles—accumulated dross on the surface of the plate surrounding the pierce hole—build up and present issues for parts nest layout and torch movement. When piercing stainless steel thicker than 2 in., an operator often has to adjust the torch movement to accommodate the slag piles or has to pierce, stop, and scrape the dross before it hardens and adheres, only then proceeding with the part cutting.

The best possible plasma cut quality on thin stainless is achieved with a high-definition plasma cutting process and with a nozzle that is vented (see Figure 5). Though the process was first developed to advance cut quality on mild steel, it is now being applied to thin stainless steel. The higher gas volume with the vented nozzle increases pressure to form a tighter constriction on the plasma arc. This tighter constriction enables use of a smaller nozzle bore and higher energy density. Venting improves the nozzle life by constricting the arc, and the higher flows cool the nozzle.

Advances in midrange stainless steel cutting return to the topic of gas type. Using H35 delivers the benefit of a nonoxidized edge with good cut quality and cut edge color, but from a productivity standpoint, the cut speeds are slow. Nitrogen has the advantage of much faster cut speeds for increased productivity, but the cut edge is oxidized. Machine control technology is available that has the ability to mix H35 and N2 as the plasma gas to significantly improve the cut speeds while maintaining the desirable silver or gray cut edge.

Modern piercing technology has extended the stainless steel piercing and cutting range of plasma for thick materials far beyond what was previously attainable. The liquid-cooled shield repels molten material that can adhere to the torch shield during piercing.

Advancements in plasma piercing also have led to different approaches to the operation. For instance, production piercing has emerged as a rating that describes a system’s ability to pierce (up and down motion) a given thickness 300 times with one set of consumables. In maximum piercing, the plasma torch is moving along the plate, rather than simply moving up and down. This rating uses a tightly controlled moving pierce technique to extend a system’s production pierce rating to an unprecedented 4 in. Testing of this technology for the new maximum pierce at 400 amps delivered 50 pierces and 25 pierces at 800 amps.

While so-called moving or flying piercing has been practiced for many years, this new process provides the advantage of minimal pierce length—usually only about as long as the material is thick. It essentially involves controlling table motion with torch height to create a trough that enables the slag to exit the pierce hole and direct it away from the torch front end. The pierce is initiated as high above the plate as the power supply will allow without losing the arc, and then traverses at a relatively high (gouging) speed to create the trough. The torch then begins to drop while simultaneously table motion slows until the pierce is achieved and normal cutting speed ensues. 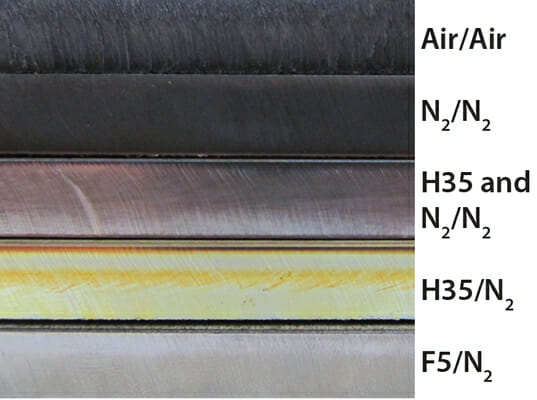 Figure 2
This guide shows the results that different cutting and shielding gas combinations have on stainless steel 304L.

The extended thickness capability for piercing and cutting stainless steel brings with it a new challenge because of the physics of plasma: The arc lags behind the torch by about 15 degrees. As a result, when cutting a thick part in a nest, a small tab may result that causes parts to stick to the nest. In addition, internal features of the part may have pronounced dings, bumps, or nubs. To address this issue, engineers have developed a new dogleg technique.

The dogleg method for thick stainless steel takes advantage of this lagging arc by focusing it onto the tab section of the cut. At the point where the leading kerf edge breaks into the lead-in edge (and before the voltage reaches the critical value of the transformer), the cut path changes direction into an acute angle (60 degrees works well) toward the skeleton. This allows the arc to transfer to the skeleton material, which reduces the voltage while driving the molten material down toward the tab and subsequently melting it off.