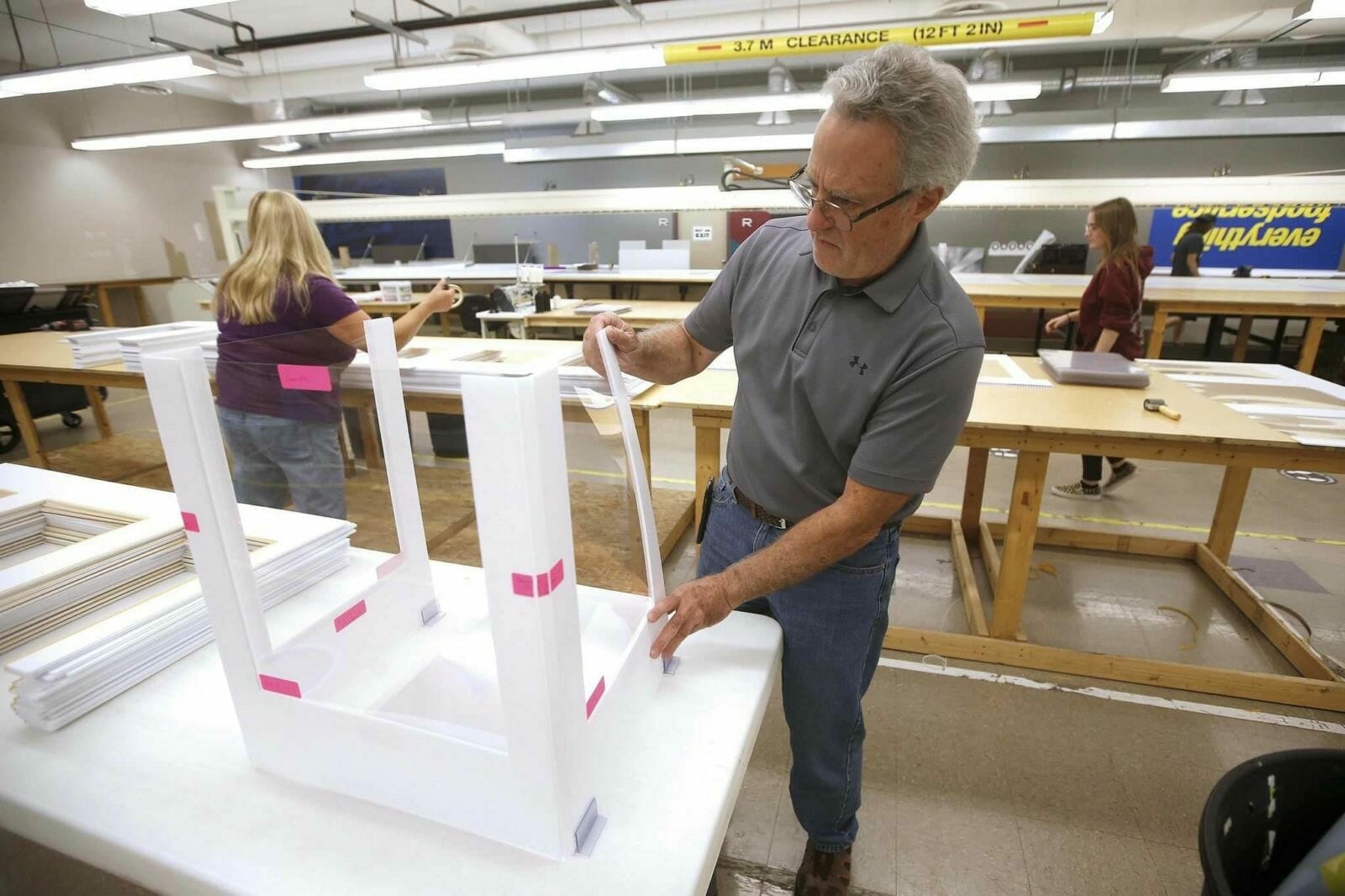 During the 2020 COVID-19 pandemic, Light Visions have been very active in producing COVID-19 protection products to help companies cope with the task of trying to stay open during this Pandemic. Using the Celero 7 Series they were able to produce all types of shields, floor graphics and warning signage, and even designed a special low cost shield to supply to schools. With the Celero 7 Series they were able to keep up the demand because of its outstanding speed. Below is the complete interview from the Winnipeg Free Press.

A week ago as Gisele Mospanchuk, the principal of Tyndall Park School, was looking at what was being proposed for desk shields for the 550 kindergarten to Grade 6 students arriving on Tuesday, she realized, “This is not going to work.”

She saw teachers fussing around with cardboard and duct tape and plastic wrap and was worried.

Then she happened to see a picture of some neat, lightweight, sturdy desk shields on a teachers’ Twitter feed and last week called Light Visions, the local company that was making them.

Allan Brooks, the president of the company took the call even though it was after the close of business and came out to the school the next day and she placed an order.

Light Visions, which is a large digital printing shop that produces custom signage for retailers like Mobil Gas and the North West Company, is used to pivoting and producing quickly for its customers. But not like this.

A couple of weeks ago desk shields for Winnipeg schools was not on its radar.

That changed when Brooks’ daughter, who is a teacher at Sargent Park School, was trying to set up her classroom.

“She told me she realized there was no way it was going to work and asked if we could do anything,” said Brooks.

In the space of two to three days his team came up with a design and once some pictures got online, and word got out on the teachers social media network, he had orders for 10,000 before he knew it.

“One principal told me that her stress level went way down when she saw how our shields could work,” he said.

This week he has shipped about 2,000 to Tyndall Park and Sargent Park and a few other schools. He has an order for 8,000 from the St. James School Division, but will need time to get supplies in and plans to ship about 1,000 per week to St. James.

Mospanchuk said, “We are ready to go, it’s come together very nicely.”

But the shield part has also come together very quickly and at the last moment. A couple of months ago, when infection counts were zero in Manitoba, it was likely not something that was high up on the planning priorities.

But with large class sizes it will be hard to keep desks two metres apart and the very young kids are not required to wear masks.

The frame for the Light Visions’ shields are made with the same kind of corrugated plastic that election signs are made of. There are three windows covered with a soft plastic film and are fixed onto desks with two-sided tape that are easily assembled and will hold up to the jostling they will likely get from elementary school students.

“We are a business and are in this to make money but it’s very gratifying for our staff that we’re meeting a need that’s out there that no one recognized until the teachers went into the classrooms and wondered how they were going to keep everybody safe,” said Brooks.

Mospanchuk said instead of using her limited school budget for new furniture the school would spend that money on shields.

“It’s quite cost efficient,” she said.

Heavy plexiglass shields would have been potentially dangerous.

“This was very cost affordable for our students,” she said. “We’re very happy. Our teachers are sending out videos to parents to show what the classrooms will look like.”