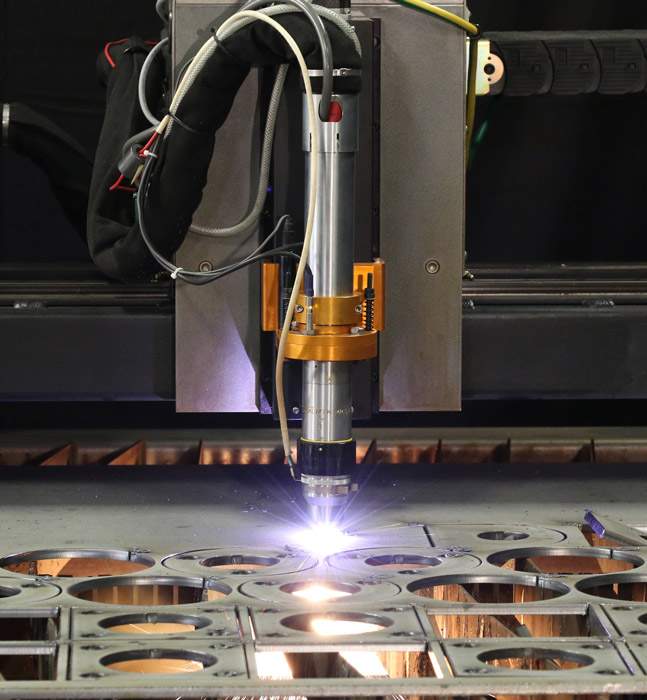 Today many HVAC shops use plasma cutters—both hand-held torches and CNC mechanized systems—to cut material for fabrication. These fabricators find that for their applications, plasma is a fast, clean, economical way for them to cut light-gauge metal.

This overview of mechanized plasma technology for HVAC includes a brief review of the industry, a review of common components in mechanized HVAC plasma cutters, and descriptions of functions and features available on today’s systems. It also looks at what’s ahead for HVAC plasma cutting in the next year.

These plasma arc cutting (PAC) systems were much less expensive than high-amp systems. They did not require expensive bottled gases, they consumed less power, and consumable parts lasted longer—yet they were capable of cutting thin materials at high speeds. A 40- to 55-amp air plasma torch could cut 24-gauge galvanized steel for ductwork at several hundred inches per minute (IPM). The same system could be used to cut up to 1/4-in. mild steel, stainless, and aluminum for light fabrication.

The Thermal Dynamics® PAK5XR and Hypertherm® HT40C were the most commercially successful of these low-amp air plasma systems, and most of these plasma cutters are still in service today. They could be used as hand torches or with high-speed gantry cutting machines.

Demand for mechanized HVAC plasma cutting machines grew rapidly. Within a few years, the four major OEMs of duct cutting machines were cranking out about 400 new frames per year. The productivity increase with this new technology was up to 500 percent as high-volume HVAC shops used plasma to compete.

The basic elements of a mechanized plasma arc cutting HVAC system have remained unchanged for the past 20 years. But each element has undergone multiple design improvements and enhancements to make today’s HVAC machines faster, better, and less expensive than ever before.

The computer numerical control is the brain of the system. CNCs for mechanized shape cutters usually consist of a processor, some amount of internal memory, a keypad, an alphanumeric display screen, and a communications link. The machine operator enters input commands to direct the cutting machine and then loads CAD-generated part programs into the control via disk or download from a host computer. The CNC translates the part programs into motion commands to the drives.

CNC technology has evolved rapidly from the microcontroller technology of the ’80s to PC-based controls in the late ’90s. PC controls for plasma cutters have been on the market for five years. They offer ease of use, features such as graphics, help screens, and Windows®-based programming. The processing speed means faster downloads of part files and more accurate cutter positioning.

HVAC software package. Proprietary software used for HVAC work allows the user to generate ductwork drawings directly from building blueprints. The software converts 3-D ductwork into 2-D CAD parts that can be translated by the CNC and cut by the machine. The cut pieces typically are labeled with inkjet printing for assembly in the shop and on the job site.

Dual-drive rack-and-pinion cutting machines typically are used for HVAC plasma cutting. These have the rigidity and accuracy to maintain velocity and position control at high speeds. Early systems with belt and cable drives were less expensive but often less reliable. Low-profile designs allow easy loading and unloading of the table. Shuttle tables often are used to keep the machine running while parts are being unloaded.

All HVAC tables use a negative-pressure air collection system or downdraft air table. Smoke and particulate from the cutting process are continuously drawn into the table through ducts and into an air-filtering system.

HVAC cutting requires a simple but important piece of equipment to maintain constant torch standoff on thin-gauge materials—the mechanical plate follower. The plate follower is a shroud that surrounds the cutting torch. On the bottom of the shroud are ball casters that roll along the top of the material. This device typically is pneumatically actuated and spring-loaded to retain force contact with the sheet. It serves two functions: to protect the torch from crashes and to maintain constant torch height at high speeds.

Many HVAC contractors also will cut thicker plate for light fabrication. In this case the mechanical plate follower typically is removed to use an automatic voltage-regulated THC. THC is designed to regulate torch position automatically for piercing and cutting and is required for high-quality cuts and long torch parts life on material thicker than 1/8 in.

In this author’s opinion, the state of the art in PAC power supplies today is the boost inverter—a more reliable, robust, and powerful system than the chopper and inverter technologies of the past. Boost inverters use sophisticated microprocessor controls to modulate power. They are designed to be better able to tolerate variations in line voltage, take more abuse in the field, and deliver better cutting performance while consuming less power. They also cost less than large console systems.

PAC manufacturers are now making inverter power supplies that accept multiple power input voltages. The power supply automatically detects the input power—such as 200 to 600 volts, one- or three-phase—without the need for manual rewiring.

Contact-start torches initiate the plasma arc by moving the electrode and nozzle relative to each other to create a high-voltage spark. This process is similar to the spark created when a household electrical plug is pulled quickly from a receptacle. The contact-start method produces much less radio frequency (RF) noise than traditional high-frequency starting systems with bug zapper transformers and capacitors and spark gap. Consequently, starting reliability is improved, and the shielding requirement for the CNC and other electronic devices is reduced.

A new, proprietary shield gas technology has been developed to deliver more energy into the plasma jet. The Coaxial-assist™ jet is designed to improve cut speed and increase cutting capacity by directing a high-momentum axial jet that is focused around the plasma torch nozzle by a specially designed, narrow profile shield (see Figure 3). The force of the coaxial jet more rapidly removes material from the kerf. Figure 4shows the speed increases that may be realized using this technology.

Since piloting and transferring the DC arc wears the torch parts, manufacturers have designed a power ramping circuit to extend nozzle life and improve arc transfer reliability. This, combined with metal nozzle shielding, improved torch air cooling, and proprietary consumable designs, has led to significant increases in parts life. Older systems averaged several hundred starts from a set of consumables. New systems are capable of a thousand or more cuts on one set of parts (see Figure 5).

Most state-of-the-art power supplies use a quick-connect and -disconnect torch. This makes torch removal for service or replacement quick and easy. It also allows for a quick changeover from mechanized to manual torch cutting.

Insulation cutting with a nontransferred arc (torch in continuous pilot mode) has been around for several years. The same mode may be used for cutting expanded metal or grating, in which the arc cannot remain transferred to the workpiece. New circuitry has lengthened the service life of consumables used in the continuous pilot mode. Other options for cutting insulation include simultaneous waterjet or router cutting for ductwork on the same machine as the plasma torch.

Machine builders anticipate steady growth in demand for mechanized HVAC plasma machines. In November 2002 a patent related to HVAC software expired. The licensing fees associated with this proprietary technology have been a significant portion of the total machine cost. The capital cost of these systems is expected to go down. At the same time, new HVAC plasma machines will be equipped with the latest in plasma and automation technology.

According to Ken Shannon, president of Advance Cutting Systems in Birmingham, Ala., a supplier of HVAC cutting and forming equipment, “Expect to see HVAC plasma cutting machines with better, PC-based control technology along with more features than ever before, and at a lower price. These machines will be able to take advantage of advancements in software, motion control, and plasma systems that have been around for a few years on higher-end fabricating machines, and at a lower price due to the fact that proprietary HVAC system licensing fees are no longer required.”

Faster, less expensive, PC-based controls with advanced graphics capabilities, wireless communications, huge libraries of part files, and online help screens will shorten training time and put the skill of the experienced tinsmith at the machine operator’s fingertips. The result will be a system that can cut fittings faster, cheaper, and cleaner than ever before for HVAC applications.