By: Dr. David A. Summers

Wandering the aisles at the recent IMTS and FABTECH trade shows, the booths exhibiting waterjet-cutting technology always seemed to attract quite a crowd. The process creates relatively little noise, so show attendees can still communicate, and cutting demonstrations often produce the type of show trinkets that attendees enjoy keeping and showing off. And, these souvenirs serve as perfect reminders of the capabilities of the waterjet-cutting process.

Fig. 1—This test block cut at the Missouri University of Science & Technology shows how waterjet cutting and conventional milling can work together to achieve remarkable results in thick plate. An abrasive jet outlined the final shape of the milled pocket, before a mechanical tool removed the central material. In this way, a very narrow rib (less than 3 mm) around the pocket can be left undistorted by the stresses imposed by the mechanical tool.

The introduction of high-pressure waterjet into the metalworking industry was not quite so high tech. Early cutting machines operated at a pressure of around 5000 PSI, effective only for removing the burrs left behind from machining. Compared to using mechanical probes, the waterjet stream could reach into part corners and other difficult-to-clear areas. Modern waterjet-cutting machines, in fact, often can eliminate deburring altogether, by combining waterjet cutting with conventional machining.
The deburring example showcases one of the advantages of high-pressure waterjet cutting: The highly focused force of the jet, when properly placed on the target, cuts without significant damage along either edge of the cut surfaces. An early example of this capability, and a noted commercial success, was the cutting of cardboard. Here, a waterjet will cut across the sheet without crimping the edges, maintaining the strength of the box edge, in contrast to mechanical cutting processes.
Adding abrasive to the waterjet stream allows it to cut through metallic workpieces as well as glass and other ceramic materials, leaving cut surfaces unchanged by the cutting process. Compared to thermal- and mechanical-cutting processes, waterjet cutting leaves no heat-affected zone, and minimizes the local stresses induced in thicker material. This minimizes distortion around the cutting path and in the narrow ribs of material left either in the part or the web. Fabricators particularly appreciate this capability when cutting thicker parts, where an abrasive jet can be used to outline the final shape of a milled pocket, for example, before a mechanical tool removes the central material (Fig. 1). In this way, a very narrow rib around the pocket can be left undistorted by the stresses imposed by the mechanical tool.
Lastly, when cutting parts that will later be fastened, a fabricator can locate and fixture the parts together in their final alignment, and accurately cut fastener holes—all in one setup. This avoids the residual burrs that would otherwise develop on both workpieces.
The savings in time that waterjet cutting delivers to a fabricator becomes most impressive when a high-pressure cutting system is integrated with a modern cutting table on which cutting and milling operations can be performed under precise computer control. It is that control, with the fine adjustment of cutting angles, which allows cuts with an edge alignment of 0.001 in. in thick plate at commercially viable rates.
With this capability, plate-nesting programs become more cost effective, as traverse time between cuts and the travel distances are minimized, reducing cutting time.

Although it might appear that a waterjet-cutting machine at a university research center might not get much use, many years ago student design teams at the Missouri University of Science & Technology (MS&T) discovered multiple applications for the process. Their applications revolve around fabricating components for national and international design competitions—a solar car, concrete canoe, etc. Waterjet cutting, they have discovered, allows them to design and fabricate parts to the most efficient size to carry the loads needed. As a result, the vehicles they build generally are smaller and lighter than those of their competitors. This has not been lost on the competition, as several other universities have since acquired their own waterjet-cutting machines. 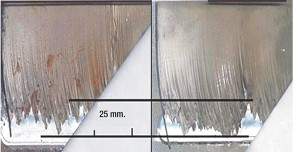 Fig. 2—Using a waterjet at 40,000 PSI and a cutting speed of 1.25 in./min., researchers performed nozzle-life tests by cutting triangular-shaped test pieces of ¼-in.-thick mild steel right down the middle, starting at the sharp end of the triangle and cutting to the thick end. The goal was to gauge how far along the triangle the waterjet would cut before it stopped cutting all the way through. Then they sectioned the cut plates to measure cut quality and average depth.

As MS&T’s use of waterjet cutting has expanded, researchers have focused growing attention on cutting-nozzle life. To compare various nozzles on the market, and learn how they wear and cut, we prepared test samples of triangular pieces of 1⁄4-in. mild-steel plate, set on edge. Using a waterjet at 40,000 PSI and a cutting speed of 1.25 in./min., we cut the samples right down the middle, starting at the sharp end of the triangle and cutting to the thick end. The goal was to gauge how far along the triangle the waterjet would cut before it stopped cutting all the way through. Then we sectioned the cut plates to measure cut quality and average depth (Fig. 2).
We set a performance requirement for each cut so that when a cut fell below a certain depth, we would consider the nozzle to have worn out. Results varied among nozzles, with operational life ranging from 10 to 40 hr. So while we do not necessarily recommend that fabricators perform the exact same test that we did, we do recommend you test various nozzle types to see how they perform for the range of materials and thicknesses typically processed.
Lastly, a point of emphasis when working with our research teams is teaching them to conserve materials, starting with an understanding of optimum sheet nesting. Another way to conserve material is to repurpose the next skeleton for cutting small parts from what otherwise would be tossed aside as scrap. Here we find yet another advantage of waterjet cutting over conventional milling, since milling turns the workpiece skeleton into chips to be sold as scrap.

As a final note, metalformers and fabricators must fully understand the capabilities of the waterjet process to cut other types of materials, including glass, and even to create art forms. To do so, take a look at Vanessa Cutler’s new book, “New Technologies in Glass,” available on Amazon. Here you’ll find several fascinating designs that can be achieved using, among other tools, abrasive waterjet cutting.
Another trend we see is growing use of waterjets to micro-etch metallic surfaces. Micro-etching, using plain water at around 20,000 PSI and performed using one to three passes, can impart unique and interesting surface finishes on bronze, steel and aluminum surfaces.

There are, in short, a variety of different ways metalformers and fabricators can apply a high-pressure waterjet cutting machine. Some of these ideas are well known, and others less so. Therefore, to shed more light on the possible applications of waterjet technology, I encourage the readers of MetalForming magazine to visit my new Waterjet Technology Blog, launched in January 2013 on the website of KMT Waterjet Systems (www.kmtwaterjet.com). There you’ll find posts providing detailed information explaining why some things work and others don’t, as well as thoughts on where the waterjet industry can grow. I look forward to seeing you there, and to fielding any questions that you might have.