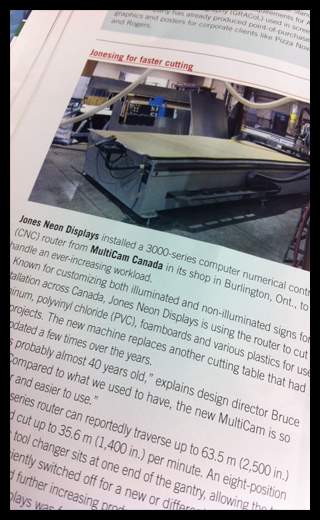 Known for customizing both illuminated and non-illuminated signs for installation across Canada, Jones Neon Displays is using the router to cut aluminum, polyvinyl chloride (PVC), foamboards and various plastics for use in its projects. The new machine replaces another cutting table that had been updated a few times over the years.

“It was probably almost 40 years old,” explains design director Bruce Lever. “Compared to what we use to have, the new MultiCam is so much faster and easier to use.”

The 3000-series router can reportedly traverse up to 63.5 m (2,500 in.) per minute and cut up to 35.6 m (1,400 in.) per minute. An eight-position linear automatic tool changer sits at one end of the gantry, allowing the tool in use to be efficiently switched off for a new or different tool, saving the operator’s time and further increasing productivity.

Jones Neon Displays was founded in 1941 in nearby Hamilton and has been a family-owned business since 1956, when it manufactured its first illuminated sign.