A question that always gets asked during a trade show where we are showcasing one of our CNC plasma machines is: How thick of (material X) can that machine cut? Unfortunately there is no quick and easy answer to this question as there are a number of variables that must be taken into consideration. Ultimately, one must determine which kind of CNC plasma unit is best suited to their operation to achieve the desired cut thickness and edge quality. In CNC plasma cutters there are generally two types of plasma units: standard definition and high definition.

If edge quality is of concern, or if more intricate cutting is needed, then you will probably need to upgrade to a high definition unit. High definition plasma units generally use a gas blend and have a smaller nozzle. The smaller nozzle tightens the plasma stream, thus allowing an operator to cut more intricate parts. The gas blend uses one gas as a shield over the plasma stream which keeps the stream straighter. High definition plasma’s more directed plasma streams result in less dross on the part, which reduces the amount of secondary processing needed. 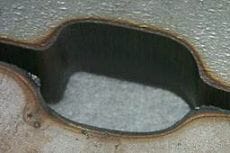 The difference between standard and high definition plasma truly becomes apparent once you start to cut materials thicker than ¼”. All plasma cuts will have a certain amount of angularity. Standard definition generally produces 15o of angularity whereas a high definition unit will produce closer to 3o. This disparity only becomes apparent on materials thicker than ¼”. For any cuts higher than ¼”, the edge quality and squareness (amount of bevel) of the cut will be greatly affected if using a standard definition plasma unit. This is also true for hole-making. Standard definition units will not produce accurate, bolt-ready holes without secondary processing.

Of course, the benefits of a high definition plasma unit must be weighed against the increased cost. Standard plasma units will generally range from $40,000-80,000, whereas a high definition unit will start at $80,000. Cost, thickness of material, desired edge quality, and the type of secondary processing required all must be considered when choosing the right plasma unit for your operation. Working closely with your CNC plasma dealer can help customize your CNC cutting system to fit your operation’s needs.