The 5 Types of Cutting

In CNC routing there are generally 5 types of cutting: male, female, center, cleanouts, and drilling. It’s important to recognize which category your cut falls into as you will need to indicate the type of cut in the CAD software you are using. Each type of cutting has a specific purpose, requires specific types of drill bits, and the machine operator must take into account certain parameters for the cut to achieve the desired outcome.

A male cut is usually the outside cut of a piece, or the final cut in a piece to allow it to be removed from the material; the cut is around the object. When cutting a male tool path, the cutter comes down on the outside of the part to ensure that the dimensions of the final product, width and height, will be as designed. A result of using router bits is that creating sharp inside corners is impossible, as even the smallest router bits have a diameter. This must be taken into consideration for male cuts when going inside corners, as the operator will never be able to truly achieve an inside corner with a 90o angle.

As one might imagine, a female cut is the opposite of a male cut. A female cut is cut inside the piece or cuts material that is to be removed from the piece; the cut is inside the object. Female cut shapes always need to be at least a little larger than the diameter of the bit for the CNC software to generate a tool path, and the cuts will always be slightly rounded, the same as male-cut inside corners. 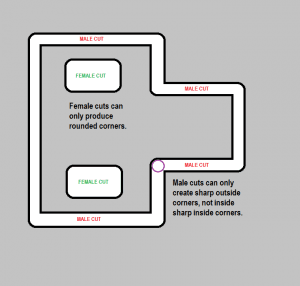 On Center or Online cutting is when the bit follows the center of the vector shape as it was drawn in the CAD software. Unlike male and female cuts, on center cutting can follow a simple line segment rather than a polyline as the bit does not need to find the “sides” of the cut. A polyline is an object in AutoCAD that consists of one or more line (or arc) segments. On center cutting is most used on shapes that have already been cut and require secondary cutting such as beveling using a V-bit.

A Cleanout is similar to a Female cut however instead of cutting all the way through the material, the cutter is only cutting to a certain depth and then milling out a shape, similar to hollowing out a canoe. Cleanouts are used for creating grooves in materials or for 3D routing. 3D routing is best using materials that will not warp during cutting and since the drill bit must make numerous passes to clear out a certain area, the process can take quite a bit of time. Using larger bits is recommended if you plan on cleaning out a large area to reduce cutting time.

Drilling is again similar to Female cutting in that the cut is inside the piece. However drilling is meant just for creating holes and the hole created is exactly the same size as the bit used. Drilling can mean cutting all the way through the material or part-way to create a countersink hole.