Waterjet Cutting- Deepening a Hole and Cautions with Cutting Glass

By Dr. David A. Summers, Curators’ Professor at Missouri University of Science & Technology

The last three posts have described what happens when a jet of water first arrives on a surface, and then starts to penetrate into the material. At a close stand-off distance the erosion starts around the edge of the jet, and continues to widen the hole as it gets deeper, until a point where the pressure at the bottom of the hole falls, and the jet stops going deeper. The lateral flow away from the bottom of the jet continues to erode material, however, and so the hole gets a little wider at the bottom. This creates a small chamber under the entrance hole and this can build up enough pressure that it can cause the material around the hole to break.

In the last post I showed where this happened with a 1-ft cube of rock that had been broken with a single pulse, but this fracture of the target can occur when piercing glass or other brittle materials. So the question becomes how to stop the fracture if one is using a CNC waterjet for cutting glass. This applies when the job calls for making an internal cut in the glass, and not when cutting in from the side, although that also has some problems that I will address in a later post.

When starting an internal cut, obviously, if it is possible, it means piercing a starter hole through the glass in a region that is going to be part of the scrap, if this is possible, as it would be, for example when cutting a sculpture. A secondary reason for that location, apart from confining any small cracks that might happen during the pierce, is that these starter holes are larger in diameter (for the reason given above) than the cut line once the jet starts to move, and that hole section would appear as a flaw on a final cut line.

Vanessa Cutler, in New Technologies in Glass discusses the process of cutting in more detail, but suggests that the starter hole be pierced at a lower pressure than that to be used in the cut. This is so that the pressure within the cavity will remain lower during the pierce, and insufficient to cause the glass to break. She suggests (and she has a vastly greater experience than I in this) that the piercing pressure be around 11,000 to 18,000 psi – this varies a bit with abrasive grit size, machine size and glass type. She also recommends, when there are multiple cuts to be made on a sheet, that all the piercing holes be completed before any cutting begins. One of the reasons for this is to avoid constantly resetting the cutting pressure, which could be a problem, if you forget to lower the pressure back down before starting the next pierce. (Would I as an Emeritus Professor ever be that absent-minded? Why else bring it up?)

You will notice, with abrasive cutting into glass, that there is not the belling at the bottom of the cut that there is with plain waterjet cutting, and that the hole tapers with depth, as the cutting effectiveness reduces with the fall in pressure with depth, and the jet is less able to cut into the side walls of the opening at these lower pressures.

Stepping back from glass cutting to the more general condition where the jet runs out of power at the bottom of the hole, the main reason for this is the conflict between the water in the fresh jet coming into the hole, and the spent water trying to make it out of the hole at the same time.

One way of overcoming the problem is to interrupt the flow of water into the hole. Back in my grad student days we tried doing this by breaking the jet into slugs, so that one slug would have enough time to travel to the bottom of the hole, cut a little, and then rebound out of the hole, before the next slug of water arrived. There was relatively little sophistication in the tool we designed to do this. Simply it was a disk, with holes drilled in it at an angle.

The reason for the angled holes was to make the disk self-propelling as it rotated under the jet, since the angled edges of the hole forced the disk to continue rotating once started. (On a minor note the disk would rotate at several thousand rpm, and the noise that it made was loud enough that I was instructed to only carry out the tests after the staff had left for the evening). 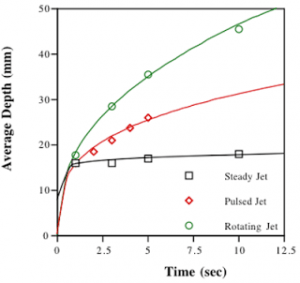 As can be seen in the graph, with the pulsating jet more energy was getting to the bottom of the hole, without interference, and the hole continued to deepen over time. However the interruption tool had a number of disadvantages, apart from the noise and that the disk would be very rapidly destroyed under an abrasive jet. It was wasting a significant portion of the energy, in a more optimized design, that I won’t discuss further, the energy loss was about 50%. But if the jet was moved slightly over the surface, and in these early tests the easy way to do this was to have the target rotate with the jet hitting the rock just offset from the axis of rotation. (At the time high-pressure swivels weren’t yet available). This gave the upper curve in figure 4, and a much more rapid penetration of the target.

In more modern times the nozzle is moved, either by causing it to move slightly around the hole axis, or by causing a slight oscillation or “dither” in the nozzle while the pierce is taking place. This is generally a feature of the control software that drives the cutting table. But the reason for the movement is to get the water flowing in such a way that the water going out of the hole does not interfere with that going in, and so there is a reduced risk of pressure build-up in the hole, with the consequent cracking that this would cause.