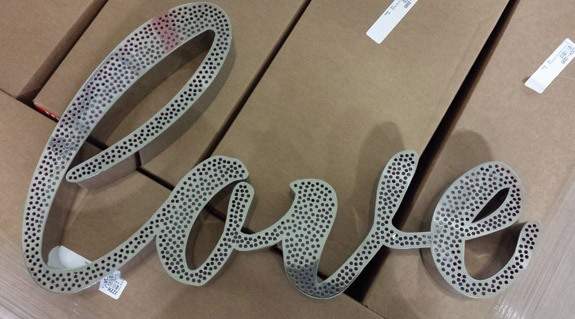 What is it about retail signage that makes it stand out? Size certainly matters—the larger the sign, the easier it is to see. Lighting is equally important. But in an age where Amazon Prime and online shopping give us fewer reasons to set foot in brick-and-mortar stores, drawing customer attention is crucial. For retail stores, signage is much more than a beacon of commerce. It’s a marker for an established brand that conveys familiarity, personality and a mission.

One fabricator’s mission is built around the importance of constructing a flawless sign. Founded in 1946, Ruggles Sign Co., Versailles, Ky., manufactures custom signage for retailers and companies including Victoria’s Secret, Kay Jewelers, Nike and other household names. Each retailer’s sign cultivates a sense of identity with the brands, doubtless a component of company success. Most of Ruggles Sign’s products are fabricated from aluminum, though the shop is increasingly working with stainless steel and sheet metal. The latter are materials it has always manufactured, but more so now since Ruggles Sign brought on a waterjet cutter from MultiCam Inc. 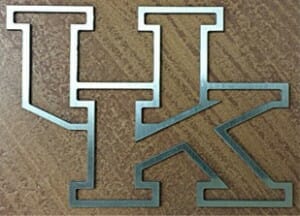 Before it purchased a waterjet, Ruggles Sign outsourced tight, intricate cuts it couldn’t achieve with its CNC routers. Outsourcing wasn’t the problem, rather the issue was scheduling it, says Tim Cambron, president of Ruggles Sign Co.

“It’s not so much about cost savings as it is about time,” he says. “Before, we had to fit any contracted work into our schedule, and it might be three days before we got it back. It’s more about controlling when we want to cut.” Now, the company shaves days off of lead time previously associated with farming out work.

Ruggles Sign isn’t a stranger to Dallas-based MultiCam’s machines. In 2002, 2006 and 2013, Ruggles Sign bought different MultiCam routers before the 3000-series waterjet, also in 2013. The waterjet has an 80 in. by 192 in. cutting bed, a sizable option to accommodate the larger sheet stock Ruggles Sign cuts.

The 3000 series waterjet in Ruggles Sign’s shop, specifically the 3-307W with a KMT Waterjet NEO40i intensifier, slices through materials with 55,000 psi backed by a 40 hp three-phase motor. It delivers this beam of water at 0.72 gallons per minute, according to MultiCam.

Ruggles Sign typically fabricates aluminum from 0.050 in. to 3⁄4 in. thick, and 26 gauge up to 1⁄8 in. thick stainless steel stock. It also cuts some brass, 1 in. mild steel, two-way mirror and 3⁄4 in. acrylic. Within the last four months, the company has transitioned from a 55,000 sq. ft. shop into one that’s 166,000 sq. ft., giving Ruggles Sign the chance to not only add the waterjet, but redesign workflow.

In the old shop, workers crossed paths with each other quite a bit. “That was one thing with our new plant. We wanted to focus on eliminating traffic footsteps,” says Cambron. Improving shop workflow was imperative. Flat sheet racks and shelving are next to the loading dock doors, so when new material comes in, it’s loaded onto the racks directly. The cutting operations, comprising mainly the routers and waterjet, are next to the shelves.

“We’re not moving material any more than we have to,” he adds. Once material comes off the router table or waterjet, it goes straight to the fabricators, which are located near the machines. “Now it’s step by step, from the router and fabricators to prep and paint, assembly and shipping. We’ve streamlined the workflow.”

For each of the machines—the routers and the waterjet—Ruggles Sign only needs one worker to operate it. A support person helps the entire crew with material handling or provides other assistance, if needed. There are about 100 employees total.

Ruggles Sign focuses mainly on national retailers for its signs, but also fabricates signage for financial and healthcare institutions, regional retail signage and custom one-off jobs. For the bigger, nationally known retailers, Ruggles Sign will make signs for roughly 20 stores in any new mall throughout the country depending on which retailers are tenants.

It supplies signage directly to the customer. When a contractor is hired to build out a store, the signs are then sourced from the retailer.

Any part of the signs requiring sharp, small, tight cuts, where the inside corners come to a point, is where the waterjet excels. Think of block text with 90-degree angles, like that of Bath & Body Works. The radiuses of the router bit are too big for some cuts, “unless you take a saw and cut out points,” Cambron says. “But the waterjet provides pinpoint precision. A lot of the more intricate work we were outsourcing on the waterjet, we are now able to bring in-house.”

Jamie Venlet, service manager for MultiCam’s Great Lakes region based in Grand Rapids, Mich., says the 3000-series waterjet gives customers the ability to cut “just about anything under the sun.” By eliminating outsourcing, Ruggles Sign not only reduces cost, but more importantly, crucial lead time. The fact that the company already had MultiCam routers made for an easy addition.

“You control your own destiny,” Venlet says. “All of our cutting technologies use the same controller so if you know how to run one of our machines, it’s a piece of cake to learn the others. This makes for good continuity as well as a shortened learning curve.”

MultiCam has four waterjet lines: the V series waterjet, the 1000, 3000 and 6000. The 3000 is the most common and targets anyone looking to cut multiple shifts day-in and day-out, says Venlet. It’s a workhorse used in many industries. It accelerates quickly, reaching full speed of 1,500 ipm in less than 3 in., and has very rapid traverse movements, which are movements while not cutting. While the 1000 and V series are more budget conscious, they still operate well under the demands of a production environment. Compared to the 3000, its overall speeds are reduced and components are not as large, he says. The 6000 is better suited for thick and oversized pieces.

For Ruggles Sign, waterjet technology isn’t new. However, the improvements in efficiency the waterjet delivered since bringing the technology in-house are refreshing for the workflow.

“We can control our schedule and it’s far more efficient, plus it also gives us capabilities to offer more services to customers,” Cambron says. “There are jobs we can do that before we might’ve shied away from. Now we can do it.”