Waterjet machines help fabricators get back to business 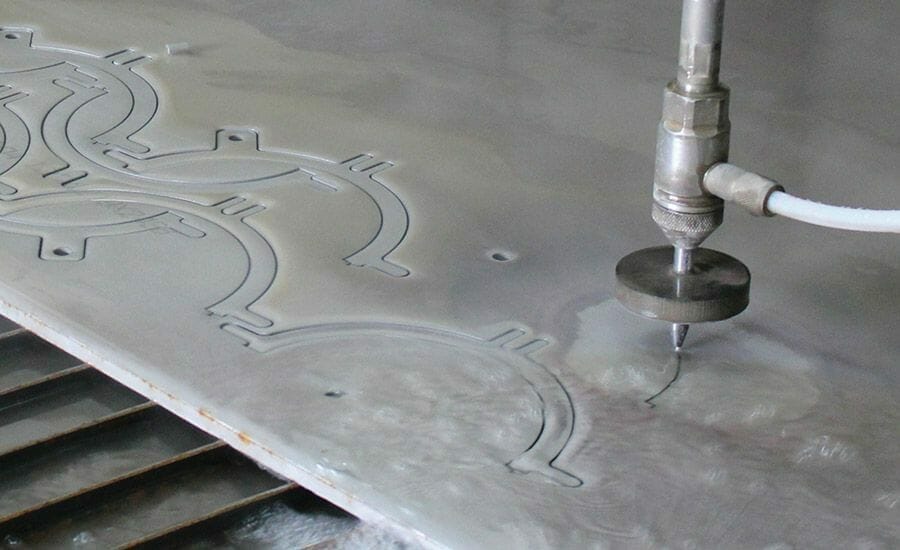 0 comments
Waterjet machines help fabricators get back to business

September 2021 – As the world inches back toward normal, fabricators are finding their footing. Rashad Galloway, fabrication products manager at Texas-based MultiCam Inc., says that after reducing capacity—or even shutting down—to meet safety requirements, fabricators are “being bombarded with orders.”

To keep up, they’re turning to machinery builders like MultiCam to solve their immediate needs and accommodate future growth. Often, “they need a machine that is capable of cutting anything and everything. And the waterjet is a tool that can do that.” 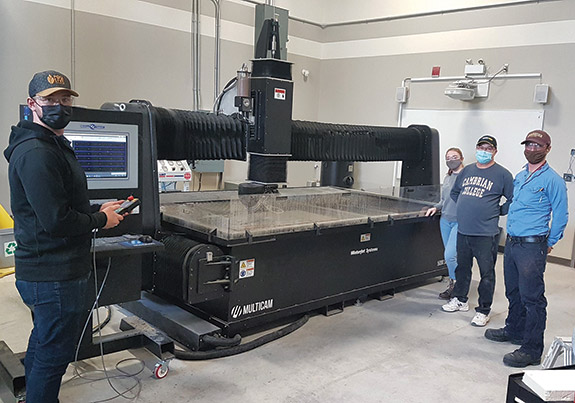 Adding a waterjet to an already-humming operation can provide flexibility and a more-efficient workflow. Galloway gives the example of a milling shop that needs more output. “For this type of operation, a waterjet helps consolidate part processing. Instead of continually rotating and repositioning the material in the mill when machining the part, the waterjet allows companies to blank out the part’s initial rough shape and then take it over to the mill for the final shaping on critical features. Then, the milling machine is focused on what it does best—holding very tight tolerances.”

Moving that first process to the waterjet, however, requires a shift in thinking—from blanks to sheets of material.

“How many parts do you need? 50? That’s only a quarter of a sheet versus 50 blanks,” Galloway says. “The waterjet has the ability to nest multiple parts on a sheet very closely together, and that increases the efficiency in yield of material bought versus material parts output.

“When doing a rough cut on the mill,” he explains, “the shape of the blank is oversized because it has to be mechanically clamped during the process. With the waterjet performing the initial operation, however, the rough shape might only need to be 5 percent bigger than the finished part.” That adds up to only 5 percent of material wasted, versus 40 percent when using non-nested blanks.

Galloway points out that on the waterjet, an operator can “cut it and forget it”—setting parts to run while attending to other tasks and then coming back to pick up the parts and proceed with the milling.

In the wake of a challenging 2020, MultiCam has embraced its model of “complete CNC solutions” even more, helping customers determine which technology will produce parts to specifications in the least amount of time.

“All types of technologies have the same root source of software and concepts,” Galloway says. If a customer is using a plasma cutter and they want to venture into composite materials or aerospace manufacturing, a waterjet excels because of its versatility, he says. “The waterjet system provides a user interface that’s almost identical to that of a plasma cutter. So companies don’t have to learn new systems and retrain their entire staff because they have a new cutting technology.”

When customers express interest in a particular cutting technology, MultiCam works with them to ensure it’s the right solution. Machines also can be configured to balance efficiency with cost: adding a second head to double output or selecting a closed loop recirculation system, which eliminates the need to halt processing to clean out the tank. “We bring in the applications team to run through the entire equation, focusing on the end result,” Galloway says. “ A lot of these machines can cut the same material types. Does it make sense on the plasma? Does it make sense on a laser? We will present companies with two to four different options because our goal is to sell the right solution for the company, not just the right machine. We want them to be able to install the machine and go.”

Because waterjet systems have the capability to handle so many different types of materials, applications for the technology are endless and varied. Galloway says one MultiCam customer is cutting 8-inch-thick titanium, and, with material that expensive, “there is no room for error—the machine has to do exactly what it’s supposed to do.”

For a project like that, there is extensive cross checking and proving that the part will be cut properly before the machine begins its work. 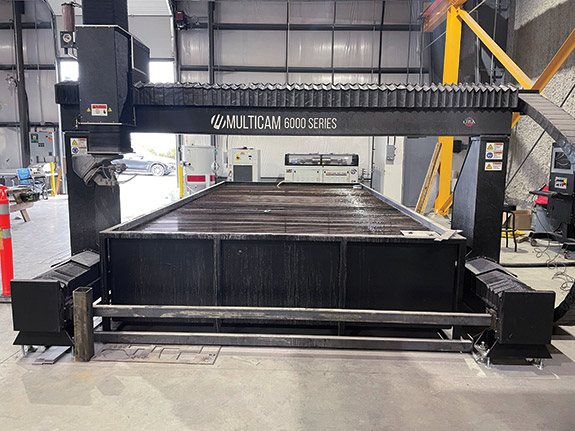 A MultiCam 6000 Series waterjet is part of the initial equipment installation at a blueberry farm’s new conveyor repair facility.

“Another installation this past March in British Columbia was for a commercial blueberry farm that processes 1.4 million pounds of blueberries a week,” Galloway says. “The machine is being used to maintain their automated conveyors made of food-grade stainless. The amount of processing done at this facility wears out the components quickly, and they were outsourcing the work of manufacturing replacements. When you use a third party, you’re on their schedule. And if they can’t get to it for two weeks, in this case, that’s 2.8 million pounds of blueberries that can’t be processed.”

To solve the downtime problem, the farm ended up building an entire facility dedicated to conveyor maintenance. “I coordinated with them to develop a layout, floor plans and organization to help ensure the workflow made sense and conveyors made the transition from broken to repaired as seamlessly as possible.”

This year at Fabtech, MultiCam is introducing a KMT NEOLine 50-horsepower pump that will be paired with its 3000 Series CNC waterjet. The pump “provides fabricators with an economical option,” Galloway says. With pumps, 50 horsepower is the point where “the cost of investment versus output performance starts to make sense. If you go with less horsepower, the machine will cut fine—but it won’t be nearly as fast. Jumping from 30 to 50 horsepower makes a huge difference in performance.”

The NEOLine pump provides this power at the right price for smaller shops. “There are a lot of shops that don’t have the same kind of capital budget as a high-production larger shop but they need the same speeds, the same ability to compete,” Galloway says.

“In 2020, when things shut down, larger corporations were able to endure the hardships. They had reserves that help keep things afloat without sacrificing too much. The owners of smaller shops have put all their dreams into building these businesses that they’ve started. When confronted with an unexpected challenge, they don’t have as many resources.”

Now that companies are rejuvenating, however, “we want to give them a way to get back in the game,” says Galloway. “So the whole concept of this pump is to provide them a better avenue to do what they do best—being there for their communities.”